A mushroom to the aid of patients with rare genetic diseases. 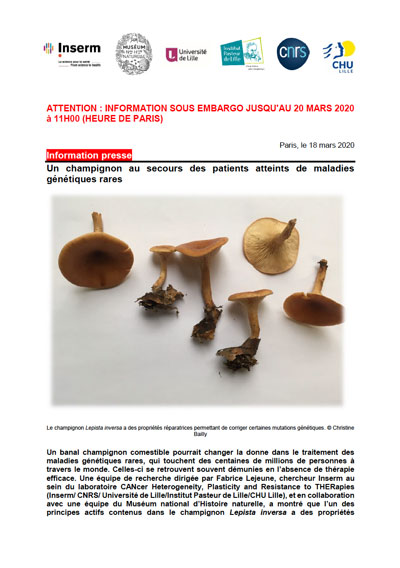 We are developing new therapeutic approaches to correct nonsense mutations that represent 5 to 40% of the mutations affecting the tumor suppressor genes and responsible for also about 10% of any genetic diseases.

Correction of nonsense mutations in cancers and other genetic diseases 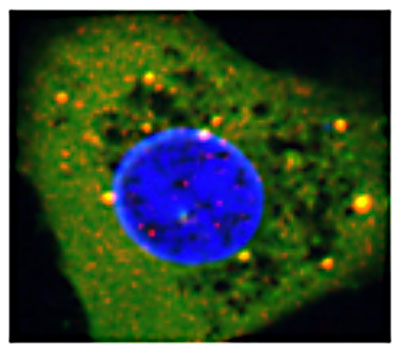 In the lab, we search for molecules capable of rescuing the functional expression of genes carrying a nonsense mutation. For that we developed screening systems to identify molecules that inhibit NMD and/or activate PTC-readthrough (Gonzales et al., Orphanet Journal of Rare diseases 2012, Benhabiles et al., Plos One 2017, Trzaska et al., Nature Commun 2020). Screen selected molecules are then tested on cell and mouse models carrying a nonsense mutation in TP53, PTEN, CFTR or dystrophin gene in order to characterize the molecules and understand how they work. We aim to develop new therapeutic approaches for genetic diseases caused by nonsense mutations and to improve our knowledge on the mechanisms recognizing premature termination codons and their regulation. Past studies from our lab demonstrated that NMD is inhibited during apoptosis due to caspase cleavages of two main NMD factors named UPF1 and UPF2 (Jia et al., Cell Death and Diff, 2015).

We also found that cytoskeleton disruptors are strong NMD inhibitors. The study of these molecules lead us to identify and characterize new cytoplasmic foci in which PTC readthrough occurs and that we named readthrough bodies (Jia et al., J Cell Science, 2017).